Videographer, Robert Faux, talks to us about joining TWO & Animation

How are you settling into life at TWO so far?

I’m loving it. I am learning so much each day, from after-effects to 3D software! The office atmosphere has a real buzz and the music is always on so there is never a dull moment! I’ve been given the chance to work on some really exciting projects already at quite an early stage in my career.

What made you decide to study BA Animation at the London College of Communication?

I’ve been fascinated by Film from an early age but Animation has always been my passion. Walt Disney’s Sleeping beauty was my favourite film as a kid and I would watch it all the time on VHS. But my biggest inspiration would have to be the film Spirited Away, by Japanese animation legend and famed director, Hayao Miyazaki. I have always been in awe of those able to conjure up imaginative movement.

Of course, movement is a vital component of Animation and its etymological origin from the Latin verb animare means to make alive or give motion to, especially air to the soul. Could you expand on this concept in animation a little?

Yes, this is something they drummed into me in my first year of university, and it really is where the magic of good animation lies.  It’s applicable to anything be it a character, text or an environment. You need to consider why you are making something move and reflect this in what you create. The most valuable skill any animator can have is to empathise with what they are creating, and if you have the technical knowledge the movement will follow (to an extent, there are always a few technical obstacles).

You mentioned you are a fan of the film Spirited Away (2002), directed by Hayao Miyazaki. Are you a fan of Japanese anime more broadly?

Yes definitely! I loved all the Studio Ghibli ¹ films from quite a young age but I really got into anime series when I started university thanks to meeting new people. Masaaki Yuasa is another of my favourite Japanese anime directors. He worked on Ping-Pong: The Animation and Netflix’s Devilman Crybaby which really push the boundaries of what a 2D series can achieve. Yuasa’s work bursts with visual energy and rejects adhering to any design rules, instead embracing frequent shifts in both design and style. Japanese animation has definitely been a huge influence on my artistic direction.

What is it that fascinates you about anime?

I think what initially drew me in was the freedom these shows have. Unfortunately in the West there is a tendency to restrict animation to either comedy or to children’s entertainment. I think this is a shame because of the huge scope and potential animation has as an art form. I remember when I first saw Satoshi Kon’s Paprika (2006) and being completely blown away. Paprika, like a lot of Japanese anime, deals with very adult themes and due to its complexity has even been compared to the sci-fi thriller Inception, starring Leonardo DiCaprio.

Although Japanese animation has been an important influence for me as a creative, I wouldn’t want to discredit Western animation.  I’m still a big fan of The Simpsons, BoJack Horseman and Gravity Falls. As a child I was obsessed with Batman: The Animated Series, and more than twenty years later the quality of animation is still mind blowing. 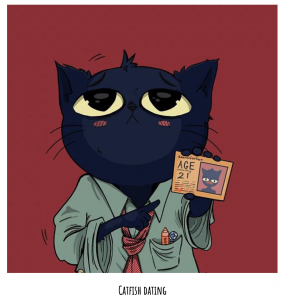 Back to you and your own authentic creations…. what has been your most exciting project to date?

I worked on a large-scale boardgame, Catfish Dating, and there is a big marketing drive to promote it. I designed 200 unique game cards. I’m proud of the game and it was a pleasure to work with Alec Nezin, a leading Games designer. I worked on a few short films whilst at university and I’ve already been working on some exciting projects at TWO, so it’s difficult to decide my favourite!

Want to know more about Robert Faux and his creative flair? Check him out here.