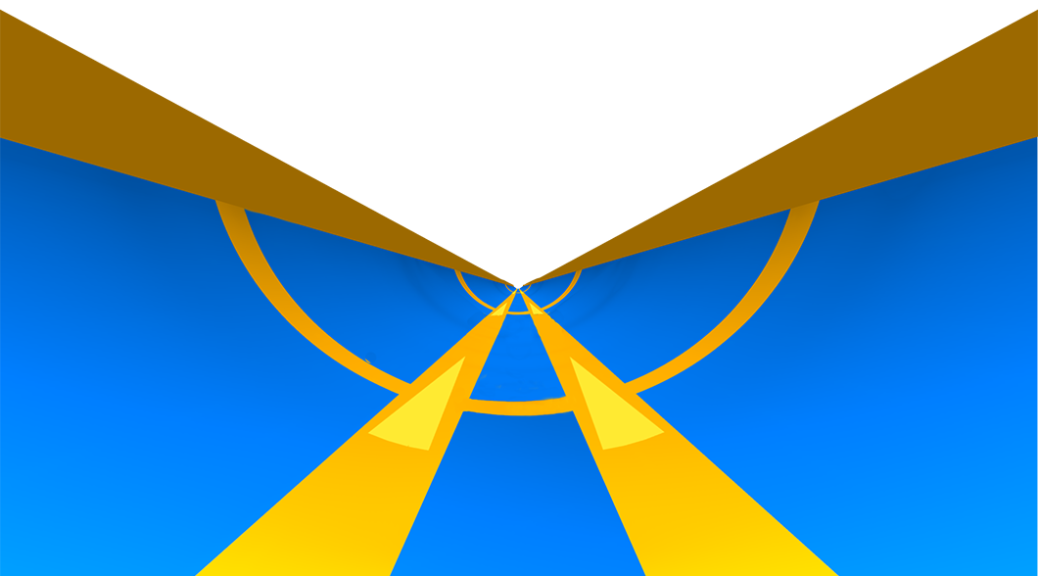 Following on from the previous blog “Can you put a hedgehog in an email?“, I began working on another version shortly after completing it, as I had some other things I wanted to try out. Ideally I would build this one again from scratch as the positions of everything are a little all over the place. But for sake of time and what I was looking to do with it as a concept, it’ll do the job. So (again) this is just a Webkit thing. Please view it in Chrome or Safari for the time being.

I must stress again this has nothing to do with SEGA or Sonic the Hedgehog and was built for experimental purposes, more in relation to some of the code exercises.

While I was creating the first version, I drew the sketch below, and it got me thinking about the bonus sections of Sonic. The other version was deliberately, more of an interactive advert/banner and I felt like this version could lean more towards a game, and be a little more complex. The idea was that Sonic would run through the track as an animation, and the user would be responsible for collecting the rings.

I did a little research and looked at some of the bonus levels, and found some assets to plan around, and started trying to piece some things together to give me some ideas to work from. I then made this mock-up from some of the assets I’d found online in various places, to try and make a vague plan.

In hindsight I should have done a scamp or draw up a plan like I did with the first version, as that would have helped me to build it much better with a more precise direction in mind. This was a little bit “shot in the dark, and I had to keep going back and changing things, which I wouldn’t have had to do,and would have had a better result had I prepared better before the build.

I then made a flat single frame from this idea, and our 3D Artist (Steve) kindly replicated the track for me with the new design. Which made life much quicker and easier than me creating it myself.
It looked incredible and worked great, but the problem I had was there was 284 individual png frames at 320px wide, and then working that into email.

So I set about making the sprite

There are tools to help create sprites, but I do like to create myself. I went through the frames and got them down to 69 frames. Ideally I would have liked more for a better animation, and then ideally for weight I would have liked less. For the purposes of the experiment I left it at that as I could have probably worked on that quite happily for days. On anactual job I’d have made the track a little shorter, which would have allowed for more frames and a smoother run. However it’s still lighter than most .gifs I see out there. (if you were to create this a .gif it would be heavier, and as we’re on only targeting Webkit for this we don’t have to think about that).

I dunno if you’ve ever created a really long PNG in Photoshop but they tend to get quite awkward to put all in one line beyond about 8000px. So I made the sprite in 3 rows of 23 frames (7360px).

I first trying coding it like this out of curiosity, however that wouldn’t loop the group of three infinitely:

But I couldn’t get that to loop infinitely, so reverted to the more obvious approach:

I couldn’t find too many sonic sprites that had a view from behind, so I had to make do with what I could find. And again it works well enough for the purpose of the example.

I wanted there to be 10 rings that sonic has to collect, the user would click/press the rings, and there were 4 things I wanted to happen.

This made up of a background image, a sprite of numbers.
The score inputs, and the ring inputs are radio buttons and each ‘ring’ has a corresponding ‘score’ with the same name. Thing ‘ring’ input is set as unchecked, and the ‘score’ is set as checked. By checking the ‘ring input’ the ‘score input’ becomes unchecked. This then affects what is displayed on the scoreboard, because whenever a score become unchecked, it moves to the next relative checked position.

Here it is with overflow set as visible, so you can see for yourself.

After all that, I think I prefer the simplicity of the first version, seems more quirky and fun, but then I think I made that point a little in that blog.